The employee, who left Facebook in 2018 and was later hired by Project Veritas, along with screenshots from a Facebook workstation “show the specific technical actions taken against political figures, as well as “[e]xisting strategies” taken to combat political speech,” according to Veritas, such as “deboosting” – by which the visibility of certain content is reduced algorithmically based on certain keywords. 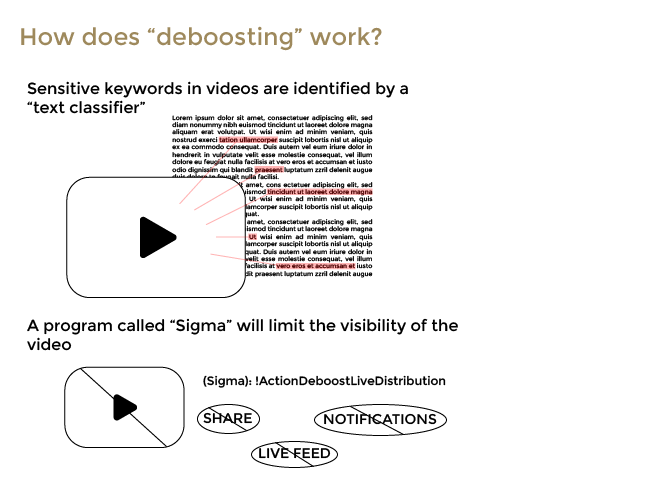 Project Veritas spoke to a current Facebook employee off the record who said that the code could limit a video’s visibility in news feeds, remove sharing features, and disable interactive notifications. –Project Veritas

“I saw things that were going on that I personally found to be troubling.”

According to the insider, the documents revealed a routine suppression of the distribution of conservative Facebook pages. The technical action she repeatedly saw, and for which Project Veritas was provided documentation, was labeled ActionDeboostLiveDistribution. Said the insider, “I would see [this term] appear on several different conservative pages. I first noticed it with an account that I can’t remember, but I remember once I started looking at it, I also saw it on Mike Cernovich’s page, saw it on Steven Crowder’s page, as well as the Daily Caller’s page.” –Project Veritas

“Louder With Crowder is investigating the allegations of concealed stream throttling by Facebook. The accusations are deeply troubling given the previously settled dispute with Facebook uncovered by Gizmodo.com, which found the show was targeted by Facebook workers with secret audience restrictions on political grounds alongside other prominent conservative voices.”

Cernovich said that the most troubling aspect is that Facebook could simply “make stuff up” about people by manipulating content.

“Facebook, or an individual at Facebook, has the unilateral power to create false allegations against someone he or she doesn’t like. The person accused not only can’t do anything about the allegation, they don’t even have an idea the allegation was made,” Cernovich said.

Also notable, the Facebook insider says that the “deboost” action does not notify page owners that their content has been subject to the algorithm, saying: “[W]ith these ‘deboost live stream’ things, there was no warning sent to the user… These were actions that were being taken without the users knowing.”

The insider did not notice the “deboost” tag on any left-wing pages.

“I looked at the Young Turks’ page, I looked at Colin Kaepernick’s page, none of them had received the same deboost comment,” she said.

The “deboost” tag appears after the word “Sigma,” which Project Veritas has learned is an artificial intelligence system used to block potential suicide and self-harm posts. Both Mike Cernovich and Steven Crowder cannot recall having ever produced any videos on Facebook that promote suicide or self-harm. Mike Cernovich told Project Veritas that in fact he has long spoken out against suicide and self-harm, and provided tweets of his and a blog post as evidence. –Project Veritas

Yamamoto is shifting the goalposts – claiming in a post that Facebook should address content “near the perimeter of hate speech,” which are “things that aren’t actually hate speech but that might offend somebody. Anything that is perceived as hateful but no court would define it as hate speech.”

The insider believes Yamamoto’s plans appears to be political in nature, rather than in response to abusive behaviors, “[i]t was clearly kind of designed… aimed to be the right wing meme culture that’s become extremely prevalent in the past few years. And some of the words that appeared on there were, using words like SJW… MSM… the New York Times doesn’t talk about the MSM. The independent conservative outlets are using that language.”

Also in Yamamoto’s report was a line appearing to say that online Facebook trolls are involved in “destructive behaviors” such as “[r]ed-pilling normies to convert them to their worldview.” –Project Veritas 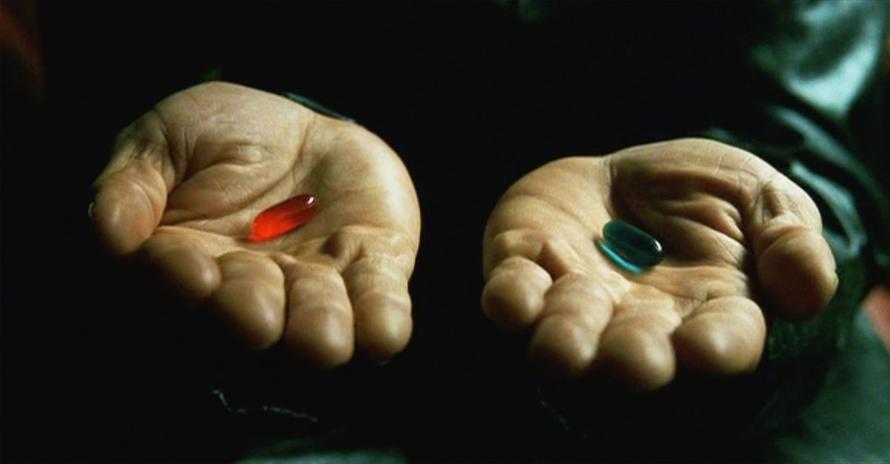 “Red-pilling” is a reference to the 1999 movie The Matrix, and refers to educating a person to facts and information that contradict mainstream narratives or allow a person to reframe their worldview through a different context. “Normies” are people who have yet to be red-pilled. 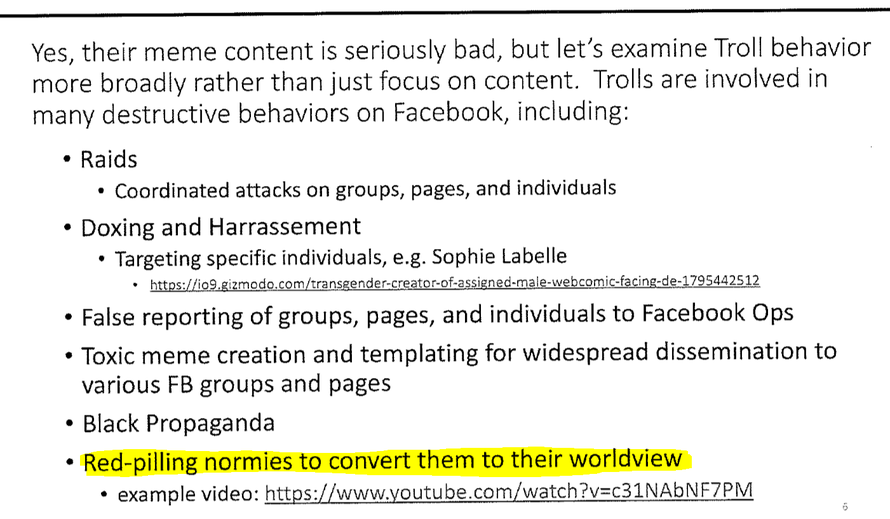 Read the rest of the Project Veritas report here.