The integrity initiative has shown us more of the deep state than, perhaps, ever revealed before. Rather than occasional crises generating desperate acts, it is now visible as a well organised machine engaged in transforming our institutions, our beliefs and our actions. The anonymous leaks have pointed the way, but much of this information was already in the public domain. Until the leak, however, nobody had made the necessary connections. The information was in plain sight but we could not recognise its full significance. This is a concern – what else are we missing? What might we miss tomorrow?

In response to this concern, what is needed is a conceptual model of what is going on; a framework for understanding. If such a model can be sketched, and can be reasonably accurate, it would offer a clear view of events, as if we stand on a mountain top.

As we tackle this task, it is important to be clear about the limitations of the approach. Models are not reality, but rather hugely simplified facsimiles of reality. The mathematician Alfred North Whitehead coined the phrase “The fallacy of Misplaced Concreteness” to describe the problem of treating the results from a model analysis as though it were reality. Therefore we must remember that the model is only an aid to understanding and must be constantly questioned reviewed and refined in order that it will be an aid to understanding and not a new form of error.

So, with all health-warnings clearly displayed, and with the proper attitude of humility firmly in mind, we set out to look at the information recently uncovered. This, we integrated with insights already established to generate a description of the deep forces at work shaping events. We offer this for discussion, criticism, comment and use and have named it:

In 1948, the uneasy alliance between an aggressive communist empire – that of Stalin – and the Anglo-Saxon brothers, The United States and The British Empire ended with the Berlin blockade and airlift. In the following forty years of cold war, the west was defended by an alliance – NATO, as no single western European country could hope to survive if targeted by the Soviet Union. For the Soviets possessed the striking power, the ideological weaponry and the ruthlessness required for large scale conquest.

The ideological war fought aggressively, with massive infiltration of Soviet sympathisers into western Media, the Arts. Academia and Government. This was the policy of demoralisation, to shake the belief of the west in its own values and erode its will to resist.

But the defences held, and it was the wall restraining the unhappy people of Eastern Europe which fell. The hour that happened, NATO became obsolete. Simultaneously the poison introduced into the west during the cold war continued to work its way towards the heart of our nations – their belief in God.

As the west thought itself safe and wondered what to spend the “peace dividend” on, NATO, without anyone really asking any searching questions, did not die but was transformed into a prototype world policeman. And George HW Bush smiled his ophidian smile and talked of the New world Order.

The aim is a one-world government, effective control of the whole planet – a new Tower of Babel if you will.

Might means a military power so overwhelming than no nation can stand against it. An enforcement by a power that is, to human eyes, absolute. This would be achieved by the unified direction of three existing world powers:

This combination renders even the teeming masses of China and India impotent, and would be able to call any troublesome independently-minded nation to heal.

Money means the ability to tax and to print, lend and control money flows. Again three existing power-centres are sufficient:

The deception, being ethereal is hard to identify at present , but the stirrings of a Rome-Jerusalem axis might suggest the enlarged unified Europe, on the Model of imperial Rome, would contain a unified one-world religion.

The military alliance NATO is the enabling-technology for the new military order. This explains:

Monetary and economic crises most certainly lie ahead, these will be welcomed by deep state interests as opportunities to restructure the financial system, with greater unity always the direction of travel.

In the world of ideas, it will be the fake and the false that are favoured, so long as one-world solutions are the result. The new religions of climate change and militant atheist secularism have apparently nothing in common with the more aggressive fundamentalists of Islam, but, in the west, they are allies; this analysis shows why.

‘Unity’ is the goal, as it is seen as synonymous with absolute power, so places of resistance will include:

In short any feature of the geo-political world that brings even a limited degree of authentic and truthful elucidation of any of the above topics has to go.

This explains why Putin has to go, why the deep state is “Never Trump” and why we have “Brexit without the exit“.

There is much more we could say but brevity is necessary for clarity. The model is

The only way to establish the worth of this model is to use it to determine which areas to study, which questions to ask and where we should dig deeper. To test and retest its accuracy as a predictive tool, and to seek improvements all the while. If you do this, please let us know how you fare. 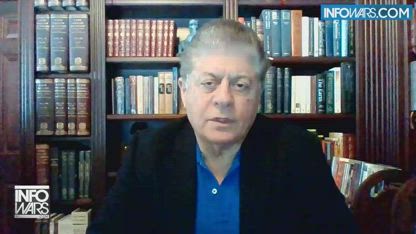 Share this article and help defeat the globalists! Judge Andrew Napolitano of https://www.judgenap.com/ joins The Alex Jones Show to break…

Make Way for the Snitch State: The All-Seeing Fourth Branch of Government

Share this article and help defeat the globalists!We’re being spied on by a domestic army of government snitches, spies and…

Corrupt Deep State Officials Covering for Biden Must Be Arrested